Dabbling with Applique - The Arboretum quilt.

The Arboretum quilt was my first experiment with applique, and is probably still my favorite quilt to date. It hangs with pride of place in my living area. Apart from the straight panel stitching, the whole thing was hand sewn, including the embroidery and quilting. All up, the quilt took a little over a year to create from start to finish. 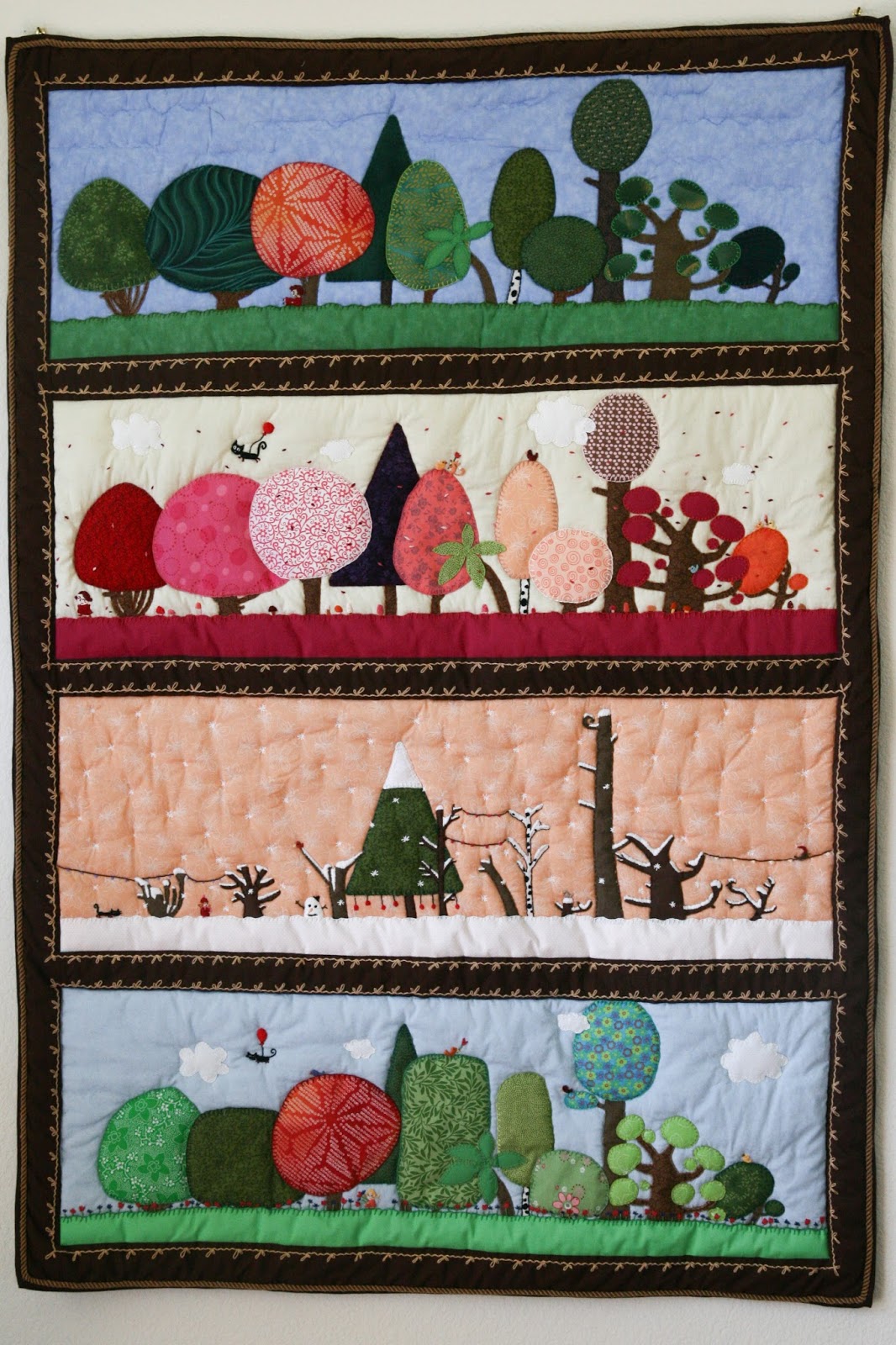 The quilt began with art work by Nicolas Gouny, who created the art for the four panels. For my installation I changed some minor things, including the character in the summer panel, and the order of the panels. I also mirrored the design, but that wasn't entirely intentional.

The preparation work involved deciding how big the piece was going to be, and buying the fabrics. I decided to buy them all at the same time, so I could match each panel to the others and allow the transition of shades through the seasons. The background fabric was almost the hardest to choose, as it was the main element in portraying the feeling of temperature. The Autumn background works particularly well, as it has speckled sparkles that add to the falling leaves design.

Once it was time to start cutting, I transformed the original artwork into a template for the applique pieces. To do this I used photoshop to resize each of the panels into the real size I wanted in inches. I then turned the image into grayscale and added a filter to intensify the edges of each tree, this makes tracing easier to see. At this point, I should have also mirrored the images, but I didn't (and still fail to remember this step). Once the templates have been designed, I print them off in A4 sheets, including as many of the individual elements as I can. The sheets are then stuck on a window to use as a light box, and the fabric stuck on top for tracing. You could also trace onto the double-sided fusible web interfacing using the paper-side as well, which I have done since this quilt.


Once I had the template traced, I ironed a sheet of fusible web interfacing on to the fabric and cut out each of the shapes. Because I wanted all the panels to line up properly, I laid out each of the panels prior to ironing the applique pieces on. Once I had the positioning correct, I ironed all the shapes from one panel on, and then used that panel to re-position subsequent panels so each of the trees were consistently placed. This was a bit more difficult than anticipated, as the original art-work had slight changes between some of the panels, and I needed to adjust some of my pieces accordingly.

The next step was to sew the edging on the applique. I wanted the edging to stand out, and decided to use a heavy-weight embroidery thread with blanket stitch. The edging really made each of the trees come to life, and differentiated all the greens in particular.


The main difficulty came with the tree trunk branches, as some of the very thin applique would tear up and peel off when being pierced with the needle (for example the red tree on the left in the Autumn panel). I used back-stitch for the trunks, which was a wise choice in the end, as I was able to 'fill-in' the bits of branches that ripped off with stitching. In future I would try to make the pieces thicker if possible, and definitely make sure to use as thin and sharp a needle as possible for edging. 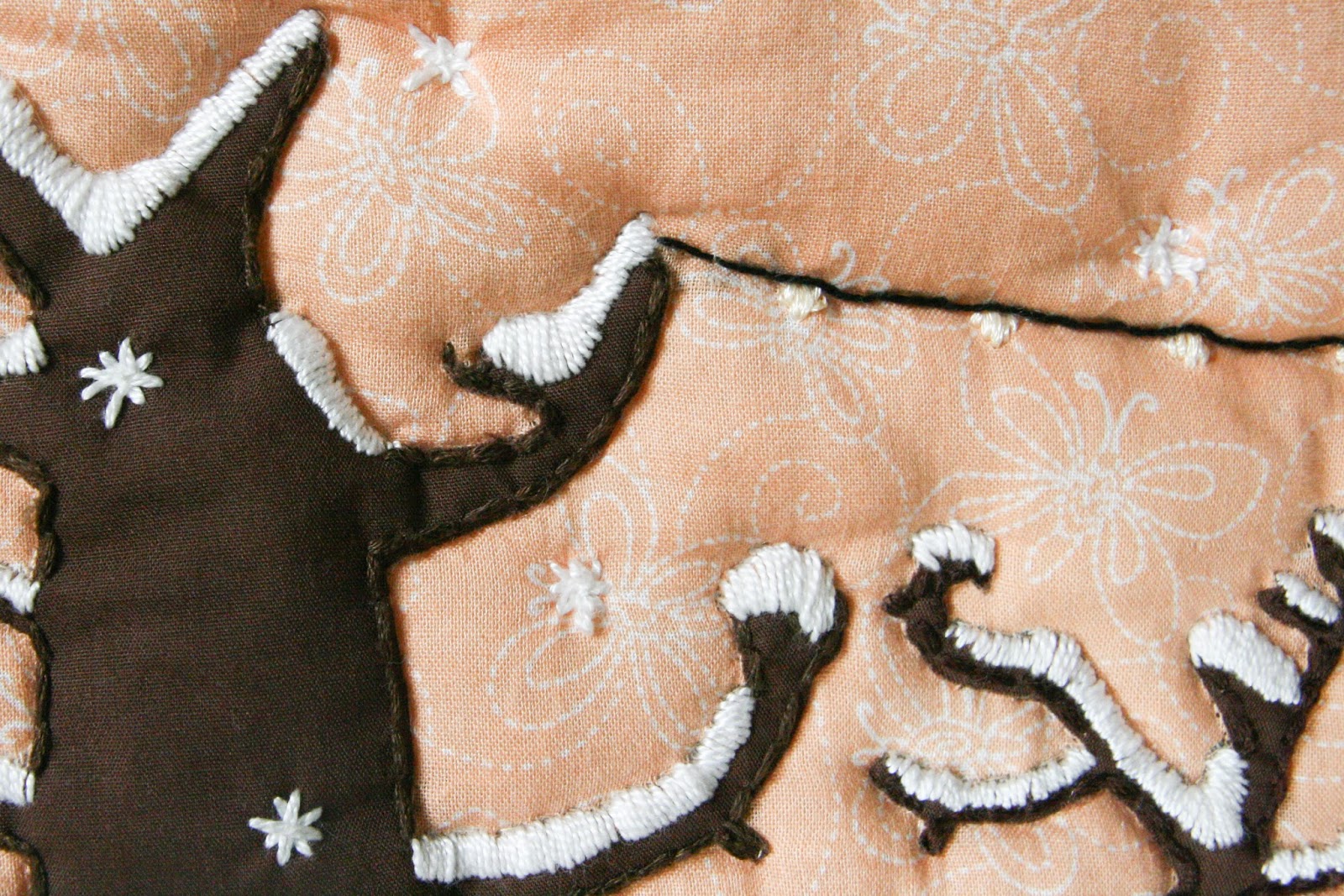 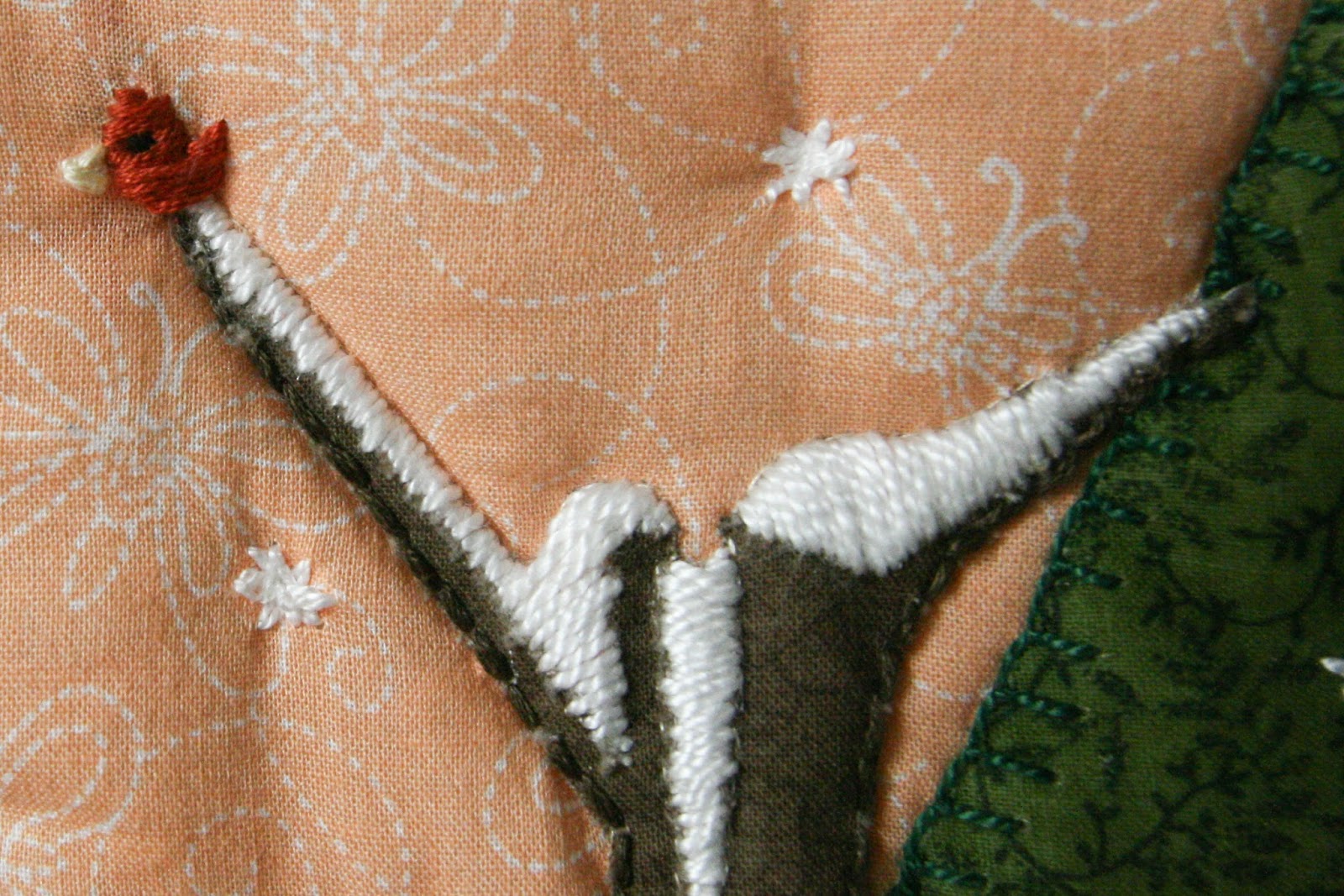 In these two pictures, you can see a bit more detail of the 'filling in'. Basically the applique interfacing couldn't stick the very small branches on properly, and they would tear when being stitched. I would have to use the thread to effectively push the fabric back on, and in some places replace the very thin edge (this can be seen in the above picture, on the upper curved branch. This is mainly a problem due to the thick embroidery thread used, as the coarseness would pull at the applique as it was being brought back through. Using a very careful horizontal pull-through technique did help with this somewhat. Later I also used a double method of thin thread to hold down, then embroidery thread outside the boundary, but this was very labor intensive.

The blanket stitching of the panels took a very long time, but once they were done it was time to begin the detailing embroidery. 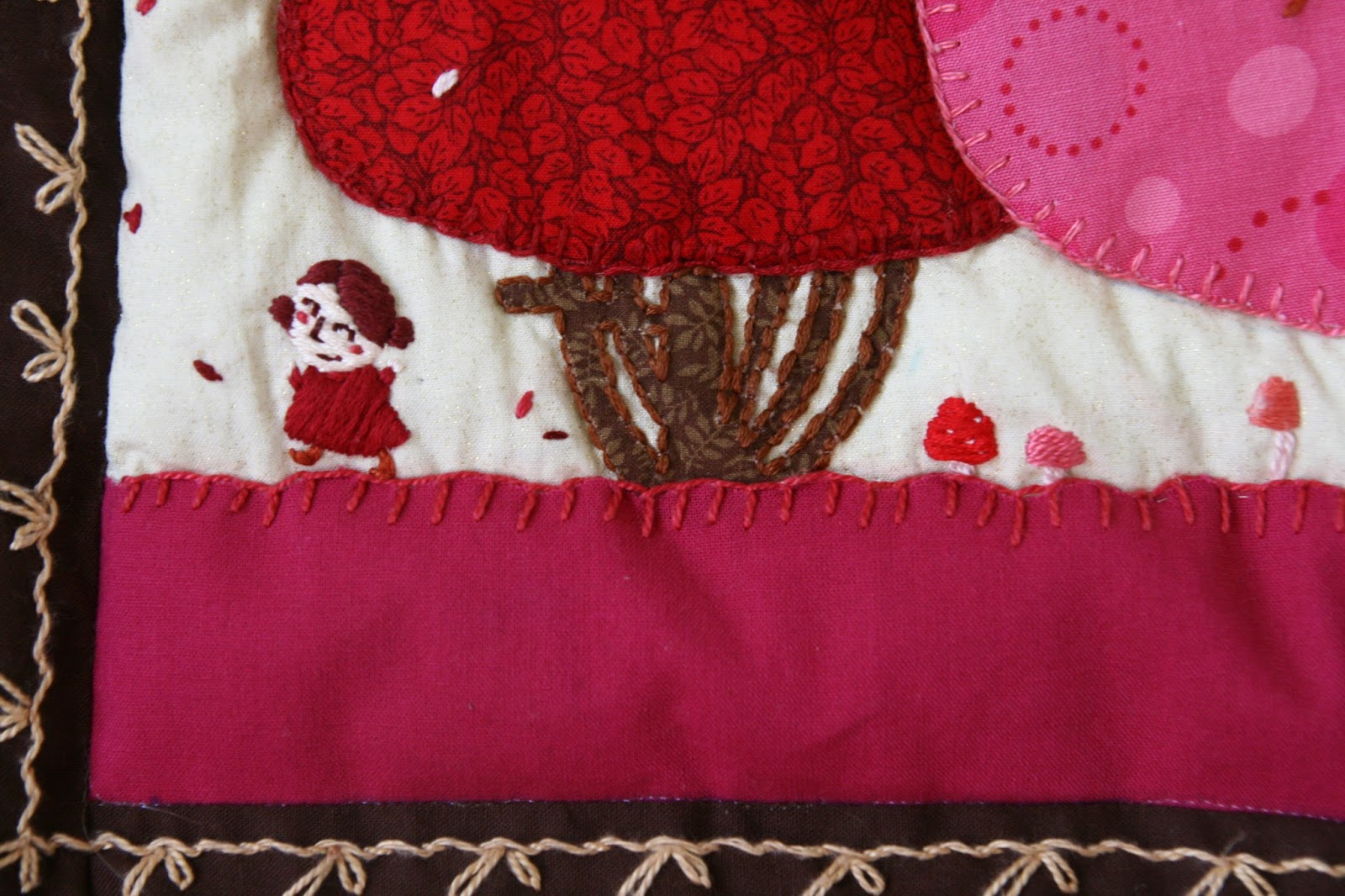 Each panel included a lot of detailed embroidery work, that in my opinion is really what makes it come to life. In addition to the characters, each bit of leaf, flower, snow and mushroom was individually sewn on.


The embroidery of the characters was difficult due to the small size. It was hard to get the single stitches in just the right position to depict the movement and expressions. There were definitely times that I needed to cut out and re-do an entire figure.


Once all the details on the panels were complete, I needed to decide how to bring the panels together. I settled on an order of Summer, Autumn, Winter, Spring, as I felt it showed the progression better, and the more detailed panels would be closer to the viewer's line of eyesight. I wanted to mimic looking out a window with my border panels, and decided on a flat brown fabric. I did a mock-up design with pictures of the panels in photoshop to see how it would come together.

The sewing of the border panels was the only machine sewing for the quilt (apart from the binding described later). It was painless and came out well, however the panels of brown ended up being too stark, and something else was needed to border the panels. After some experimentation I came up with an embroidery chain pattern to go around each of the panels. This worked well to off-set the brown, but needed something to balance it around the binding. First however, I needed to decide on how to do the quilting.

I really wanted to add a 3-dimensional element to the quilt, so I decided to use a high-loft wadding and hand-quilt around the trees. This definitely made the trees puff, and they almost looked like padded applique. I also quilted around the clouds and characters, as well as the ground.

This covered my 2-4 inch spacing for most of the panels, except the winter one which had a barren sky. In this panel I went back and pulled in each of the embroidered snow drops, making the entire sky pucker. I quite liked how it turned out in the end. 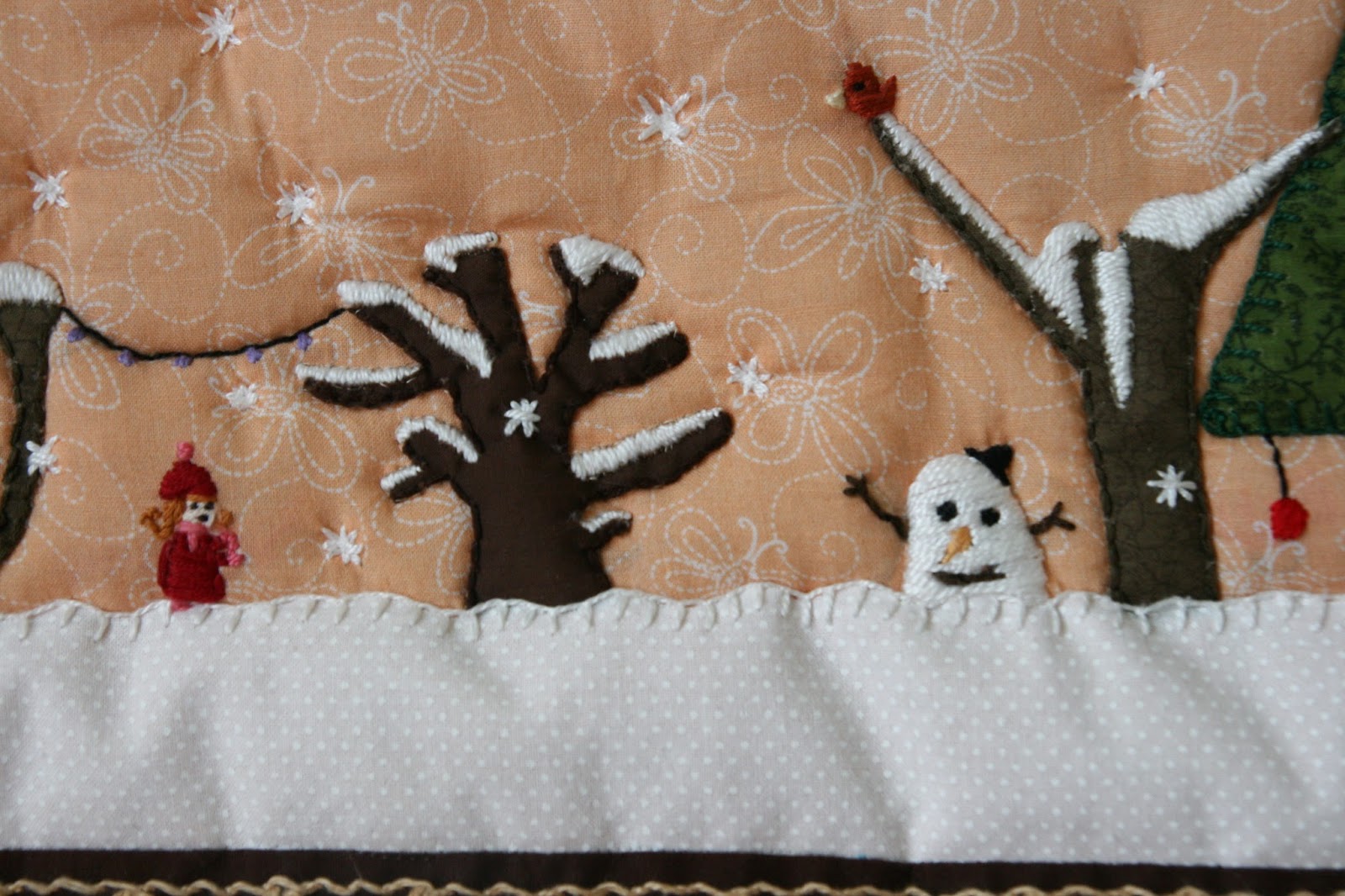 The other panel which wasn't quite covered in the end was the summer panel, and with this panel there wasn't anything already there that I could work with. I decided to try and use the quilting to depict the heat in the air, and quilted a series of wavy lines in the sky.

With the quilting complete, it was time to bind. As I mentioned before however, the detailing around the border for each panel needed something to balance it around the binding. I tossed around the idea of continuing the chain embroidery around the inside of the binding, but decided it would be too busy, and difficult to do once the binding was in place (and hard to bind if I did it prior). After deliberation I decided to do a piped binding, but I wanted it to be framed by having a further stitched binding after the piping. 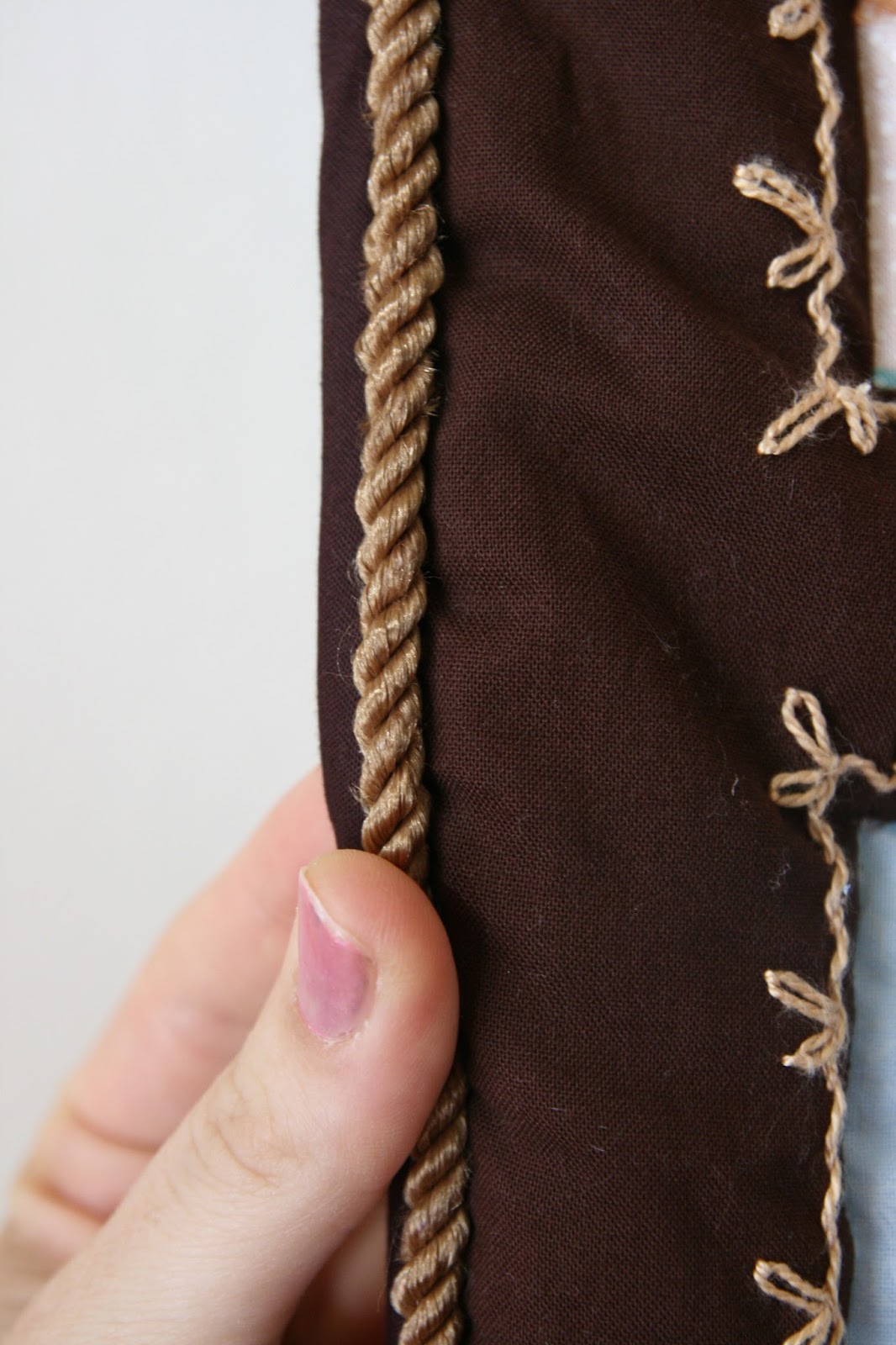 This proved to be quite fiddly, and the joining of the piping was a bit messier than I wanted it to be. In the end I did get it to work however. I used a corded piping trim and sewed it to the quilt sandwich with a zipper foot as close to the edging as I could get. I then reversed it and sewed my binding strip to the other side. This was difficult, as you need to consistently get very close to the piping or gaps will appear. I ended up hand sewing some of the bigger gaps together. Overall however, I'm very happy with how it turned out. 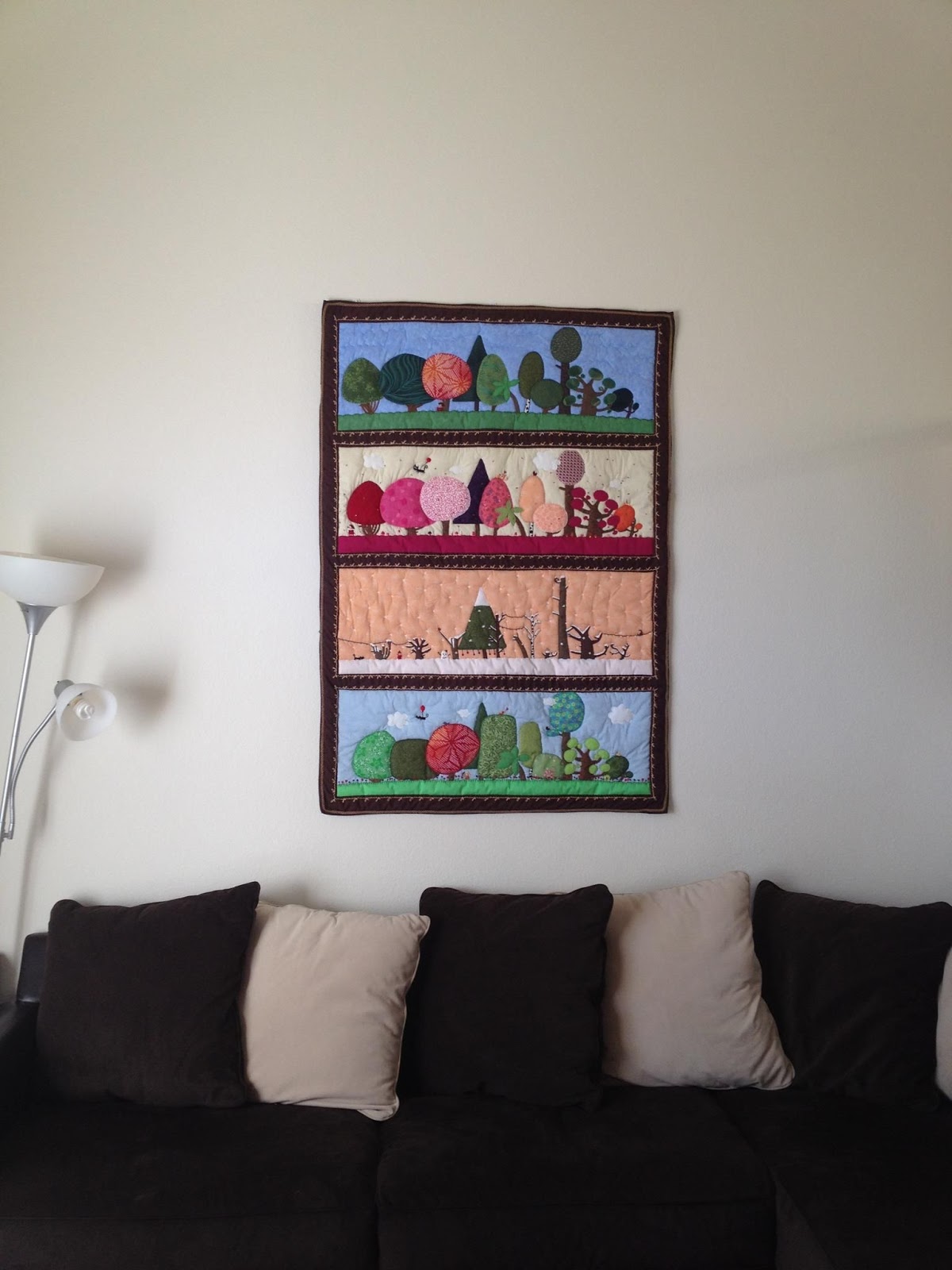 The quilt ended up being quite a large wall hanging, which goes perfectly with the vaulted ceiling of my living room. This is definitely one piece that I won't be parting with! 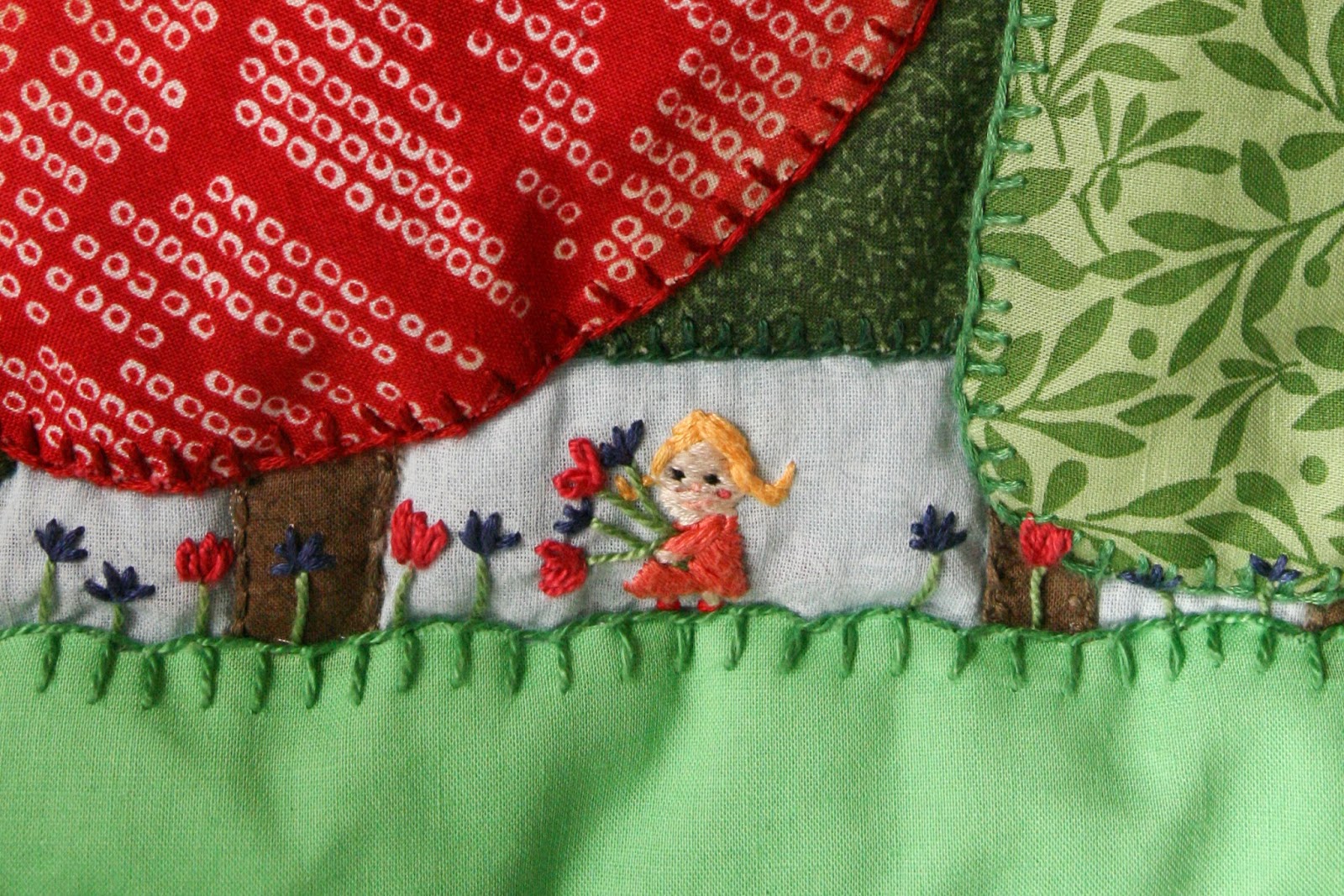 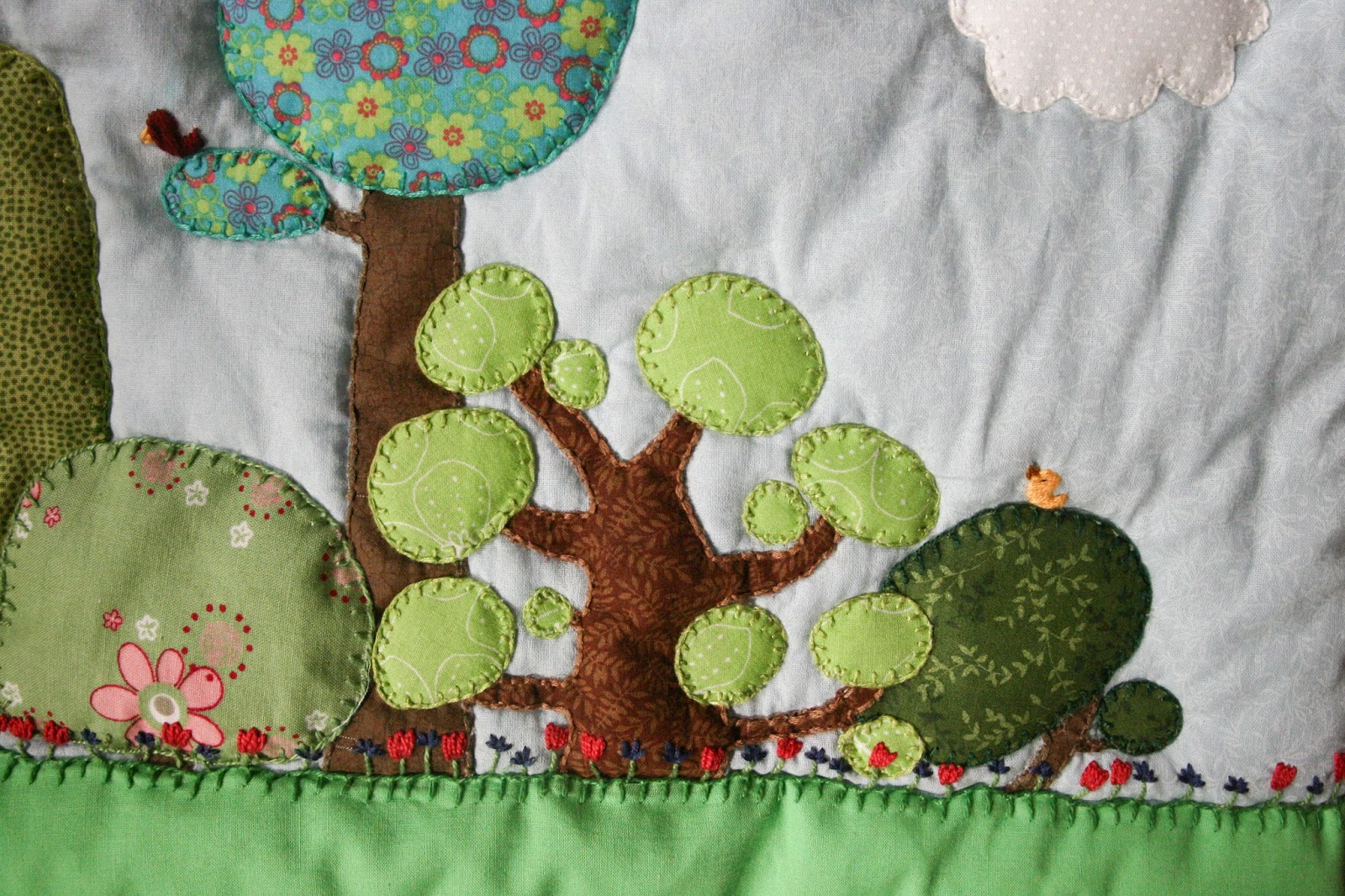 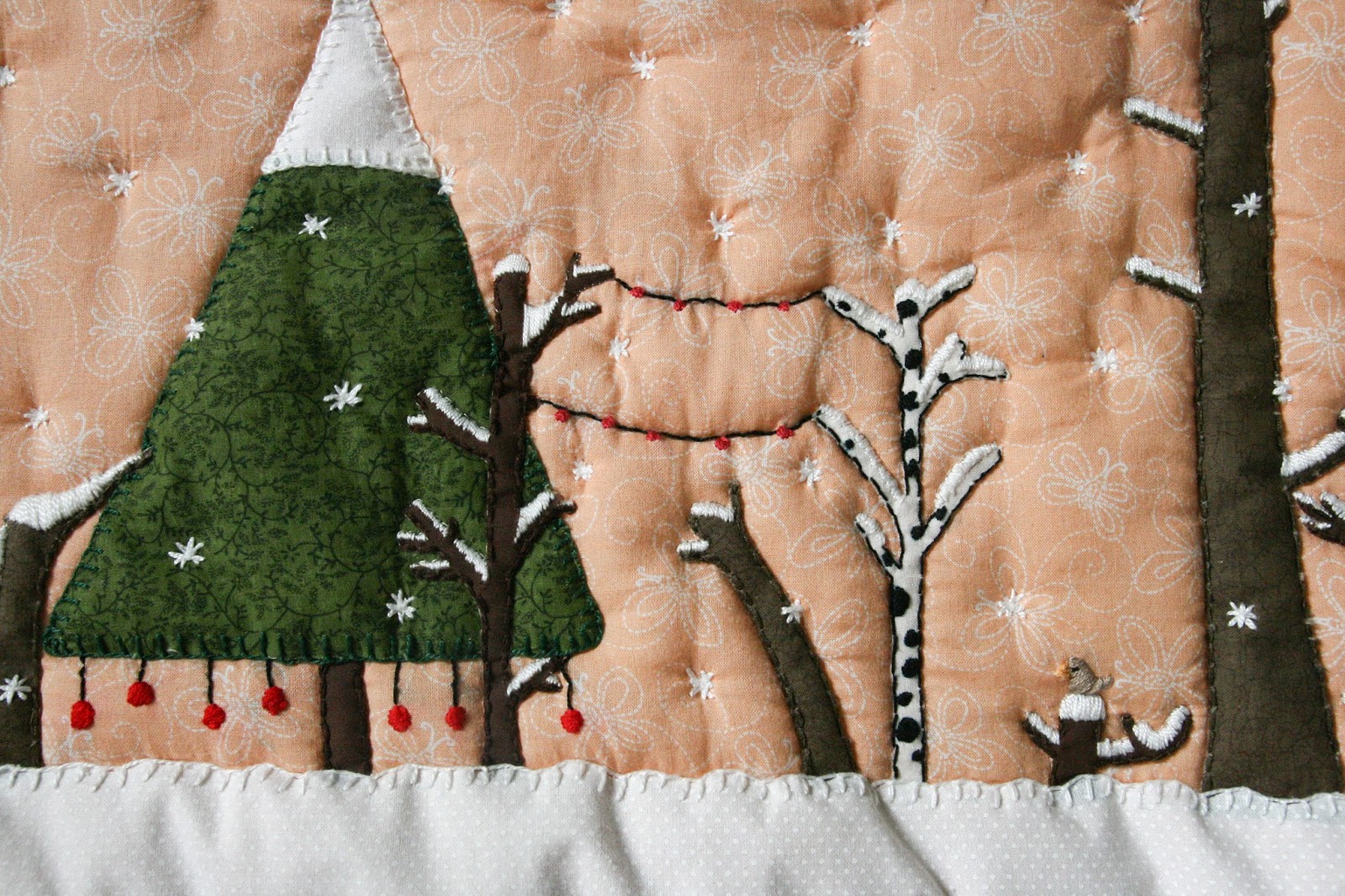 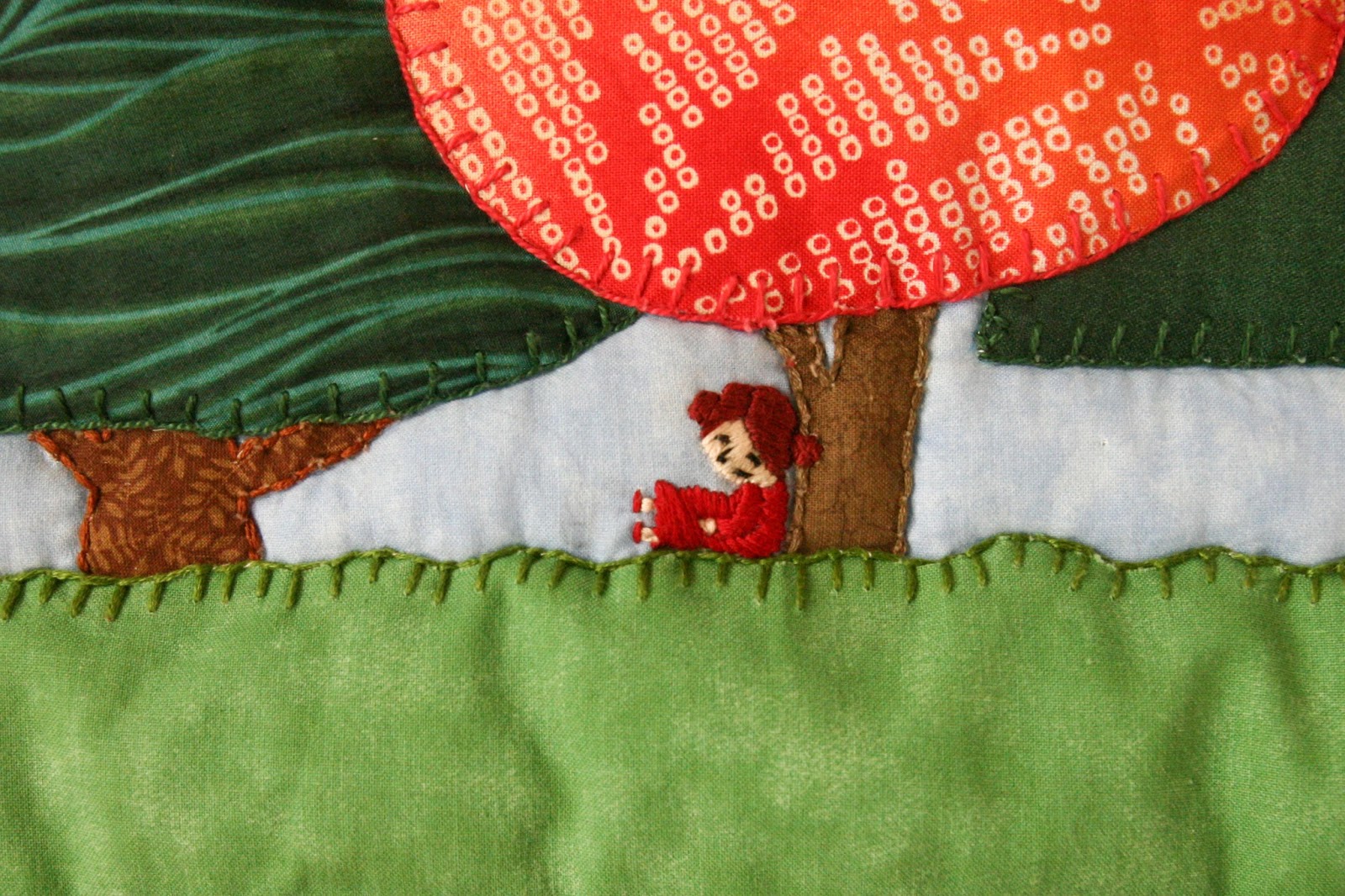 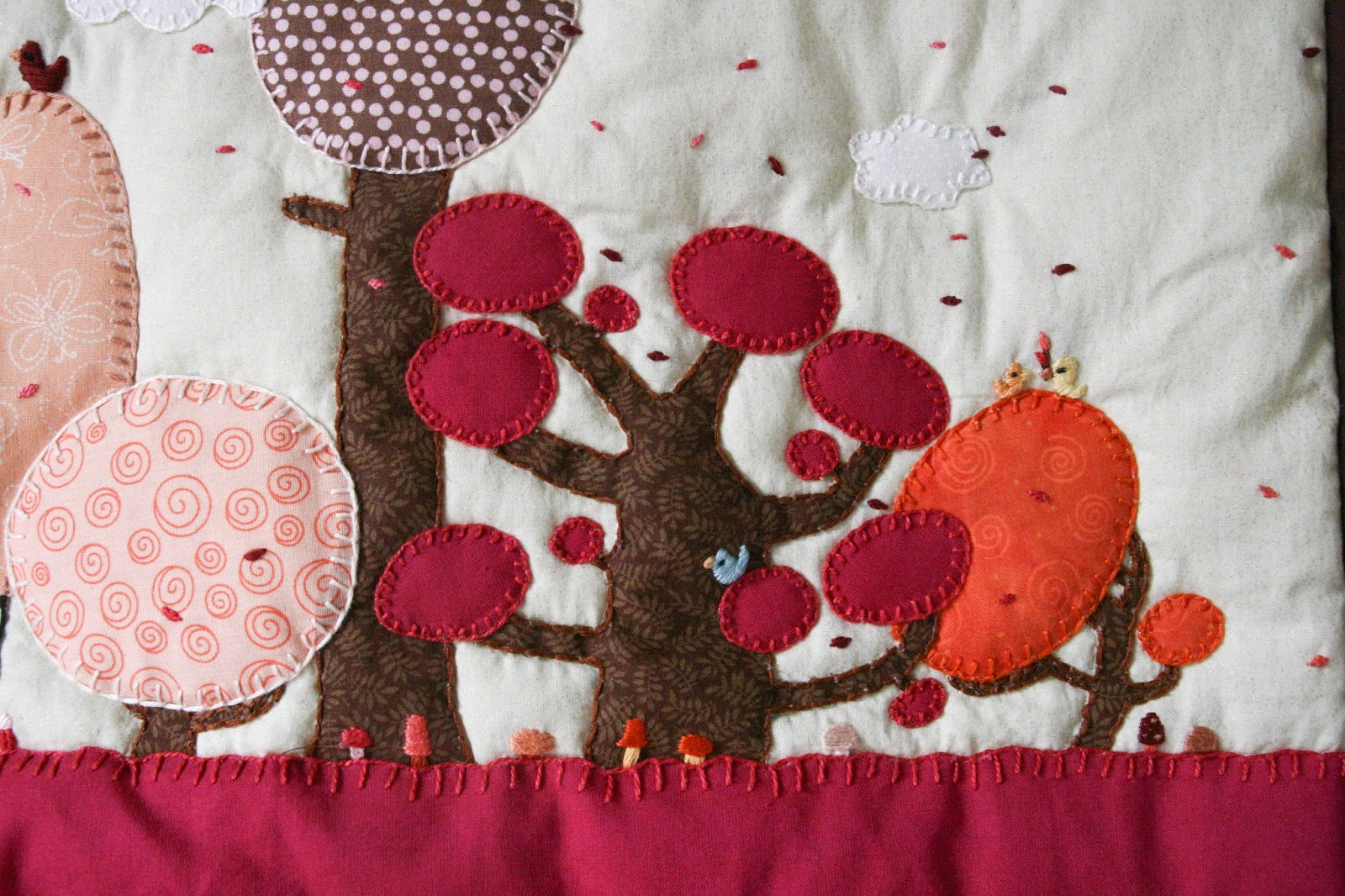 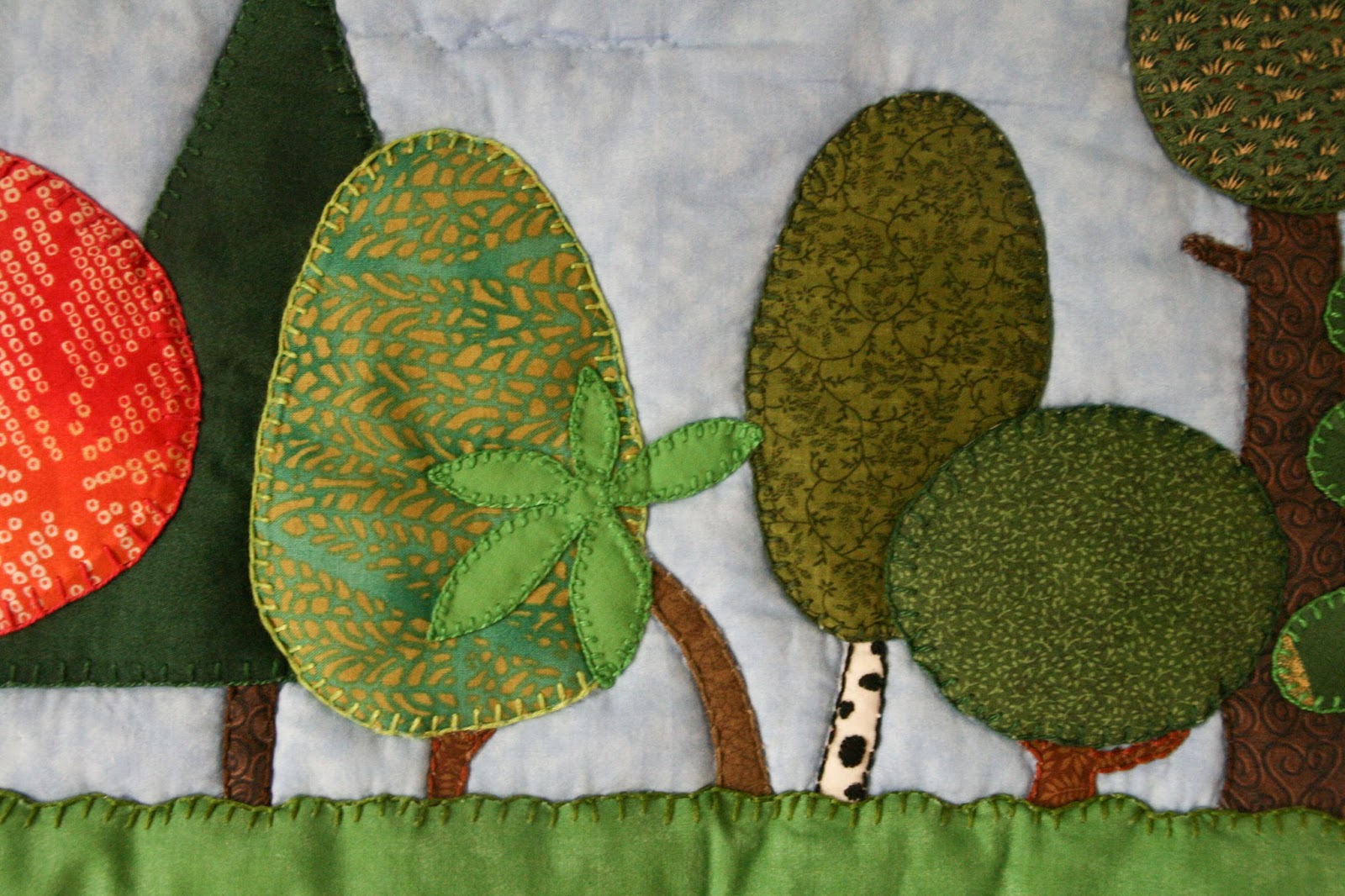